CANLIT was on sale one fall harvest time at the Hamilton Farmers' Market alongside the excellent cabbages, potatoes and squash grown by Jim and Cindy Buttrum. This supported Yates's belief that next to the absolutely essential activities of providing food and shelter, art was the most important thing people do. 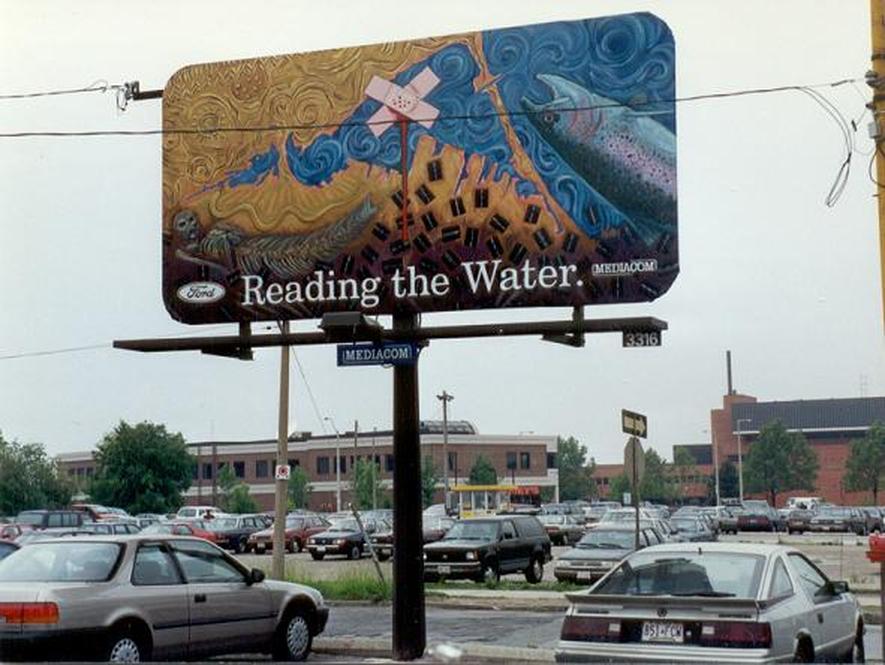 The Billboard Project was arranged through the Burlington Cultural Centre to raise awareness of the need to save and protect the waters of Hamilton. ABOVE: The billboard --- downtown Hamilton.  BELOW: The billboard indoors at the Broadway Theatre Gallery. 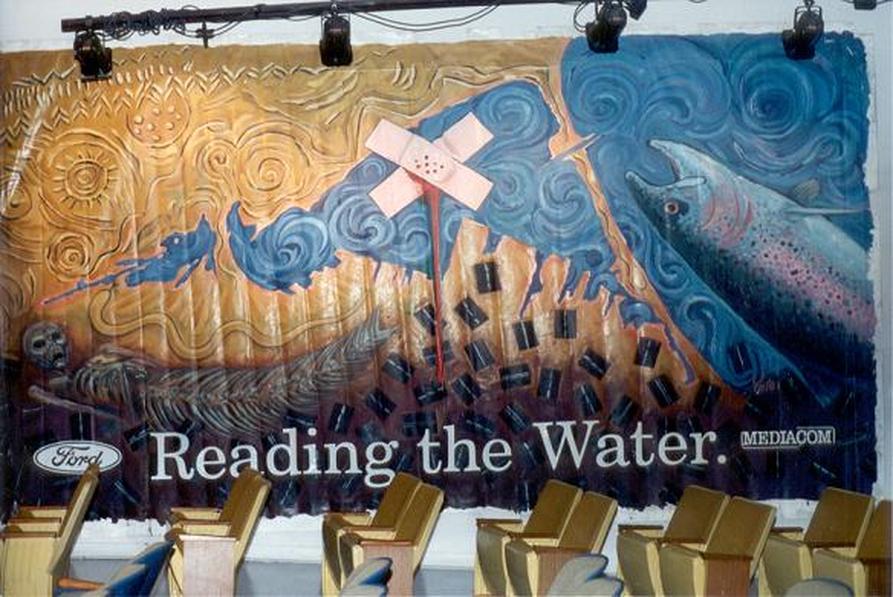 [ FOR MARTY ZULINIAK & ALL THE CLASSIC RAVINE BASHERS ]

NOTICE TO THE PEOPLE OF THE TOWN OF DUNDAS

DO YOU FIND THE STREETS OF YOUR TOWN NOT WORTH WALKING?
OF COURSE YOU DO, SO . . .
COME TO!


A CELEBRATION IN HONOUR OF THE MEMORY OF THE TOWN OF DUNDAS
WITH GREAT EXPECTATIONS FOR THE FUTURE.

"May the Dundas cannon never be used, save for the rejoicing days."

loosely based on 19th century protests 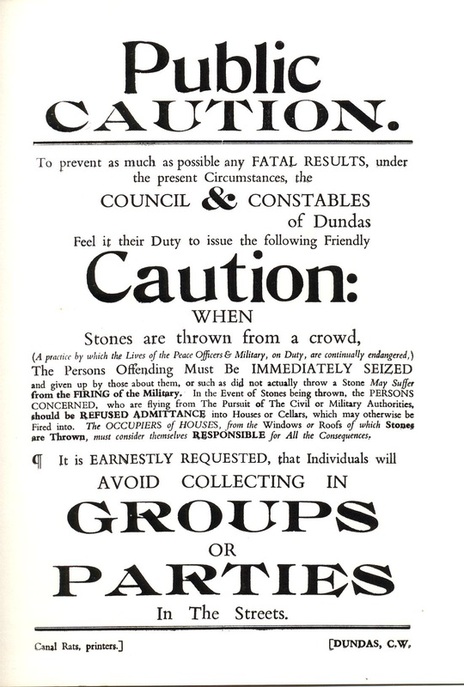 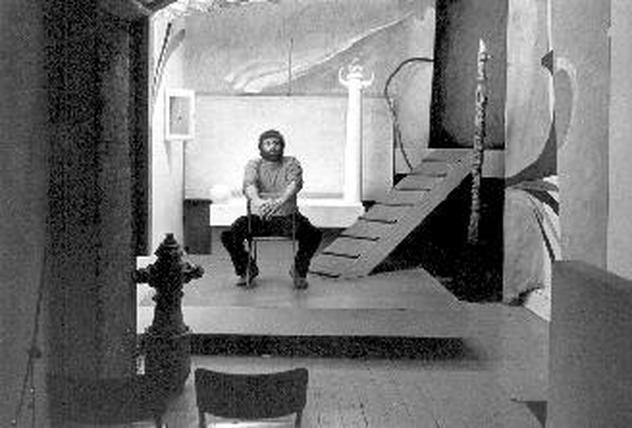 To provide the setting for an act of a three act play.  It was far more successful as a sculptural environment for gallery goers than as a stage to act out a play.  It had interesting lighting provided by things like a randomly flickering soundless and hidden TV. 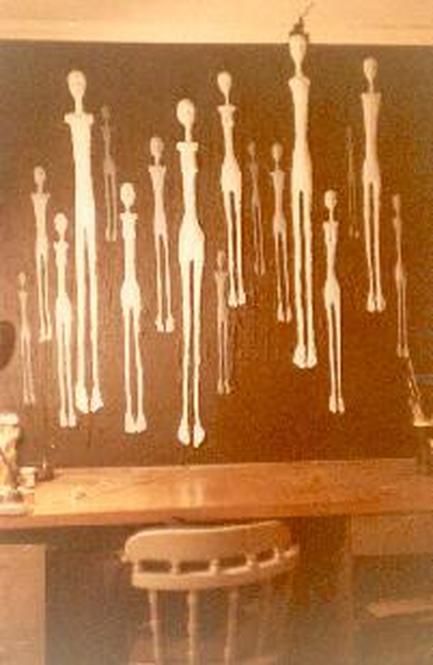 As a teenager, to the surprise of his parents, Yates converted a wall of his bedroom into a relief sculptural happening.  It was made of plaster and paint over pieces of wood nailed to the wall.  It was demolished a few years after Yates moved away from his childhood home.  This photo is the only record of that event other than the memories of those who were lucky enough to see it.  (Giacometti inspired.)

During the orchestral performance of Pictures At An Exhibition, a slide show of different paintings for each of Mussorgsky's movements was projected over the orchestra at the appropriate time.  Yates's painting (below) illustrated the 4th or "Bydlo" movement.  Below the image is Yates's statement printed in the concert catalogue. 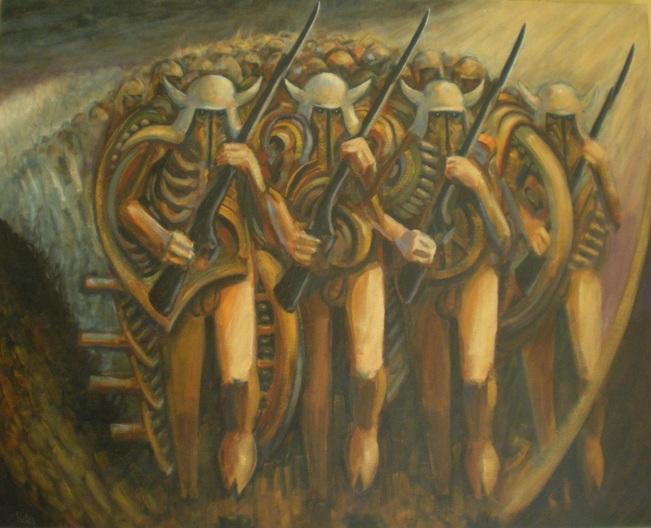 My painting is inspired by "Bydlo", the 4th movement of Mussorgsky's Pictures at an Exhibition.  Apparently the word "Bydlo" means "cattle" in Polish.  It has been suggested that Mussorgsky's inspiration for this movement was a painting depicting oxen pulling a heavy cart.  In my painting I have utilized the horns and herd mentality of cattle as beasts of burden, but the heavy, dark march of the music itself insisted that I portray the image of a large impersonal army on the move.  The "Bydlo" movement makes me imagine our sweet earth, once again, threatened by the presence of an aggressively masculine submission to the dictates of an authority based on violence.  There is a middle section of the "Bydlo" movement that suggests a uplifting ray of hope, illuminating the possibility that however invasive an act may be on the present, it will pass.

In the mid-eighties, the City of Hamilton held a banner design competition for decorative banners to line the streets of the various unique districts of downtown Hamilton.   The judges of this competition awarded Yates first prize for his designs, and he was paid the prize money, but his designs never went into production.   The City chose to make use of commercial ad-designs instead. One of the banner districts of Hamilton was to be called Jamesville because it was located on James Street North. This is where Yates chose to air in public both his disappointment and a home-made banner, loosely based on one of his designs (which in turn was based on a tiger skin, the Ti-Cats being Hamilton's football team).

On his protest banner---which was made and hung (just for the love of Hamilton) without pay or permission outside the original site of Hamilton Artists Inc.--- Jamesville was nicknamed JIMTOWN  (a name more in keeping with the collective spirit of the people of Hamilton).   At the same time, in Creative Arts' Forum magazine, Yates also proposed changing the name of Hamilton's King Street to Sovereign Citizen.  (He secretly hoped Hamilton's central intersection, KING AND JAMES would come to be known by the citizens of Hamilton as SOVEREIGN CITIZEN AND JIM.)  To its credit, the City of Hamilton did not remove Yates's banner but let it fly as a public monument and landmark.   It could be seen overhead on James Street, flapping in the wind, for a couple of years.

There is an unconfirmed rumour that Yates and Stewart with an apprentice officer "borrowed" a leaky dinghy and rowed out into Montreal Harbour one dark night, avoiding the RCMP patrol boats and the freezing water. While the others bailed out the boat to prevent it from sinking, Yates is said to have painted "Whole Day Harry" on the hull of the Halifax City. (This was just the beginning; there is more. It is a long story---too long to go into here.)

For the most part, "Guerrilla Art" is an activity for the youthful because it usually involves stealth, free time, physical stamina, situations of awkwardness or danger, an unfettered enthusiasm and joie de vivre. And there is always the potential embarrassment of being caught while doing something possibly illegal. "Trail Signs" come from a similar part of the human spirit but appear, when least expected, out in the open in broad daylight. It is healthy and rewarding "guerrilla" activity for older folk as well as the young.


A Trail Sign
Hospitalet, Spain : 1968
In 1968 --- on the same trip mentioned above (a trip which understandably culminated in imprisonment in Libya) --- Yates and Stewart spent two rideless days trying to hitch-hike out of Hospitalet, a small town in Spain. While waiting fruitlessly for a ride, they constructed an elaborate trail-sign, hoping to attract the attention of passing cars.  An attention-grabbing arrow pointed to where they stood with their thumbs out.  It didn't work. They wound up walking to another town to continue their hitch-hiking southward to warmer weather.

Trail signs in many ways have much in common with guerrilla art. They appear overnight, unannounced, in unexpected yet familiar places. They tend to be anonymous.

Yates and his son Gregory built a few very noticeable trail signs on islands in Hamilton Harbour. They were seen by thousands of people and received lots of attention.  CH TV Channel 11 did a story on them in the "You Asked" portion of their nightly newscast.  Who did them remained unknown however.

The trail signs were built in the early spring, lasted all summer and fall and well into the winter, when the ice provided a bridge for vandals who could make their iconoclastic crossing to the islands.  But brand new trail signs appeared the following spring, much in the same way seasons pass. 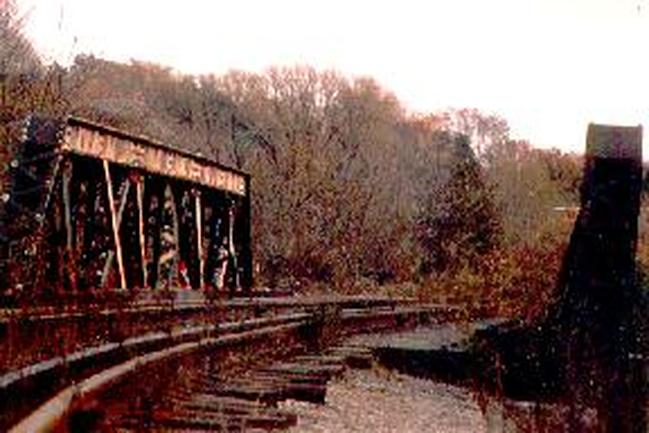 Again, it is rumoured that one night in the early/mid-sixties, Yates with his brother Jim and friend Alan Stewart transformed the rusting TH&B bridge over Spencer Creek between Dundas and Hamilton into a psychedelic vision.  Not wanting to be considered vandals, they justified their action by saying that since it was rusting, it needed painting anyway---they were actually helping the life, strength and safety of the bridge with their graffiti (although it was not called "graffiti" in those days---it was just good old-fashioned painting).

At that time the bridge was necessary---the trains still ran daily trips to Dundas.  The photo above was taken years later when the underlying rust was beginning to reclaim the bridge.  Eventually that branch line was shut down.  When the tracks were ripped up and the bridge was finally demolished, the psychedelic paint job of many years before could still clearly be seen.


The Art of Providing Found-Objects
for Other Potential Artists

As a teen-ager Yates carved the head of Friedrich Nietzsche out of a willow log which was nearly four feet tall. It sat around his parents' house in Dundas for years after he had moved out.  During a clean-up he was asked to reclaim his art-object. Yates transplanted it to a place within a hundred feet of where thousands of people pass every day.  It was not obvious to the many passing cars but easily stumbled upon by pedestrians who wandered a few feet off the beaten track.

The last time it was seen by the artist it was a nest for carpenter ants, and dry-rot and decay had set in.  Then one day it was no longer there. It just disappeared.  It was probably discovered by an archaeologist and is now likely in a controlled atmosphere in a museum someplace, being restored, soon to go on display as a magnificent example of early Canadian folk art.  This is as it should be.  It comes from the same place---a place without chronological order, known by all those who are obsessed with chronic artistic making.


IN THE CAGE
(the site of many Guerrilla Art Happenings)